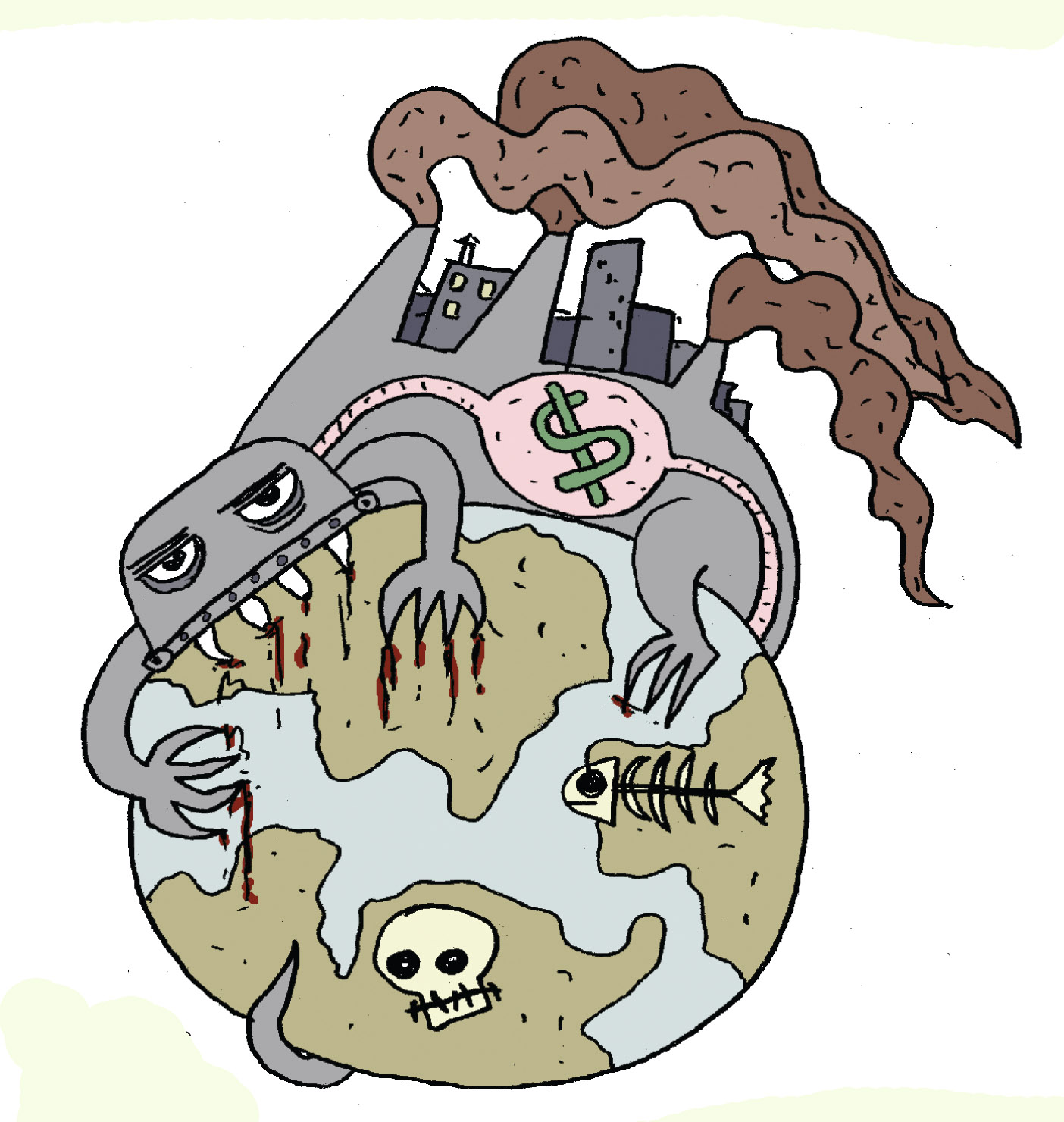 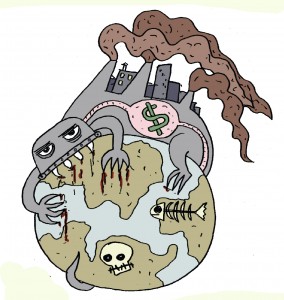 This is to specifically address class struggle as it relates to the ecological crisis. It will not address all the other (many!) reasons that working class struggle must be waged and supported.

First, we must recognize the fact that global capitalism is driving ecocide.

The problem reaches much farther back than capitalism itself. The combination of an early gendered division of labor with the adoption of agriculture and corresponding formation of permanent settlements set the stage for class divisions and the private accumulation of surplus wealth. Maintaining this arrangement required the development of states with armies, social oppression and repression to weaken internal opposition, and ideologies to make it all seem normal and pre-ordained. And as land was degraded and resources used up faster than they naturally replenished themselves, expansion became imperative, leading to conquest and forced unequal trade. These intertwined and matured over time into an ever-more complex tangle, culminating in late-stage capitalism: the all-encompassing, all-devouring, spectacular horror that is our current global social living arrangement.

The environmental crisis, specifically climate change, is the most urgent problem we collectively face. It is a simple fact that if our planet no longer supports life, then all human pursuits, including social justice, will also come to a screaming halt.

But attempts to solve the environmental crisis head-on, without addressing the underlying structural causes, will ultimately fail. Approaching it directly (for example by blocking pipelines or banning fracking) is positive but can not, by itself, overturn the socio-economic system that makes resource extraction a non-negotiable necessity. Capital is relentless, and will flow around any obstacle—or smash through it. Throughout history, it has demonstrated the willingness and capacity to wipe out anyone—including entire populations—who attempt to resist.

Historically only one class has been able to challenge capital and offer an alternative to it: the working class. This is not because of any sort of moral superiority, nor is it a matter of suffering the most. In fact, there are many others who are deprived of any means of survival altogether, which is an even worse situation than being exploited as a worker.

The reason that the working class has this capacity is that it is strategically placed. Workers have the most direct relationship with capital: they produce it. Even capitalists themselves merely manage and accumulate it, which they accomplish through the exploitation of workers in the production of commodities. Commodities embody surplus value in the form of unpaid labor, combined with natural materials (which capitalists simply claim ownership of through legal or other violent means). This surplus value, when it’s realized as profit, must be re-invested as new capital, in an inherently ever-expanding cycle.

Capitalism runs on exploitation, by paying the aggregate of workers less than the total value of their products (the rest becomes profit). So in order to sell all the surplus commodities that can’t be profitably consumed within a social formation, capitalism is structurally required to “expand or die.” The problem with this economic model on a finite planet is obvious.

The process is now at a stage where we face imminent catastrophe, unless we act decisively. Our collective strategy must be capable of smashing the entire global matrix of social relations—the economic, political, and ideological structures and practices (which all stem from capitalism’s fundamental, core contradiction at the point of production: capital vs. labor).

Only if we free society from capitalism can there be any possible basis to re-organize human activity with different values in command, such as biocentrism and classless, mutual cooperation. Once we understand that the environment cannot be saved within the system’s framework, that reforming or restraining it are impossible, then the question becomes: how do we end capitalism? How can we completely transform the way we live, so that the totality of human endeavor is no longer harnessed to the pursuit of private profit (through the production of surplus value)?

Capitalists will not voluntarily stop accumulating capital. They can’t escape its structural imperatives any more than we can. Instead they are compelled to concentrate all their political might on crushing any and all threats to their hegemony. If we are to become capable of driving them from power, we need to organize ourselves into a massive, global social force. Our only two choices are omnicide or world revolution.

Many classes and social groups are dominated by capital and have an interest in ending it, and often a burning desire to do so. But most of them, even if they resist capital’s effects extremely valiantly, will not be able to permanently defeat it. Historically, even after governments are overthrown, capitalism has either continued without interruption or been quickly restored. This is not a moral failing, but an inherent structural incapacity of the classes that have led these struggles—usually different fractions of the petit bourgeoisie (the “middle” classes). This flows from their own economic survival imperative under capitalism: the constant struggle to elevate their position in the marketplace. Thus they will insist on equality, “horizontalism” and fairness (marketplace values), but will always stop short of destroying the market itself. This is why the majority in the environmental movement (who are mostly from the middle classes) refuse to cross that line of advocating the destruction of capitalism through revolution, and will vehemently deny (“You’re going too far!”) the fact that it is the only way to save the planet.

The only class that is in fundamental conflict with capital is the working class. They face capital every day in an unresolvable antagonistic relationship of exploitation. Emancipating themselves entails stopping exploitation—wage slavery, the private appropriation (theft) of surplus value generated in commodity production—which means destroying the reproduction of capital altogether. By emancipating itself, the working class can free all other classes and the entire world from the grip of capitalism.

Capitalism can only be defeated through revolution led by the working class. This is why anyone (in all the dominated classes) concerned with saving the planet—or ending oppression and other horrors perpetrated and held in place by capitalism—must, in addition to weakening capital by resisting all its manifestations and effects, also take up, amplify, and support the struggles of the working class.