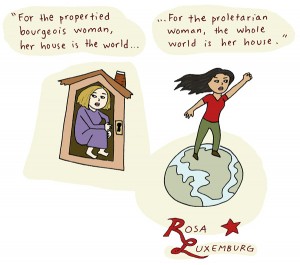 Most workers in the world don’t know the date of March 8th is of the greatest importance for them. And many of those who do know it don’t realize what the date really represented in history. For us, conscious workers, for whom the struggle is our daily life, it is absolutely necessary we know our true history, the various battles waged by our class and the lessons we should draw from them.

First of all, since many workers in Haiti and throughout the world, especially in the maquilas and free trade zones, work in the textile industry, we should know that the mobilizations held on March 8th, 1908, were carried out precisely by textile industry workers. Despite this, presently, most workers in this branch know nothing of this part of our history.

In 1975, the United Nations proclaimed March 8th “International Women’s Day”. Once more, this was a recuperation of the international ruling classes to distort the real significance of our battles. In this way, they have attempted to wipe out the collective memory of the real working-class mobilization that occurred on this date, turning it into a wide-ranging, limited celebration completely void of class content, in which all women partake, including totally anti-worker and reactionary bourgeois women. In this way, the nature and logic of our battles are obliterated. Our own history is robbed from us.

What was March 8th?

March 8th is a historic date! Doubly so. First of all, on March 8th, 1857, a large number of factory workers in the United States took to the streets to demand their economic and political rights. The owners called the police who arrived immediately and opened fire, engaging in blind repression… Later on, in 1908, the same date of March 8th was once again a memorable date of struggle. On this day, capitalist bosses in Chicago set fire to a textile factory where over a thousand women worked. A very large number was terribly burnt. 120 died! This heinous crime happened simply because the workers were demanding that the legal 8-hour work day be respected, as well as substantial ameliorations of their work conditions since they were working in a hellish environment in which their very dignity was constantly and totally denied. In this factory, however, the workers refused to cower. They fought daily. And having reached a certain level of organization, they held protests, work stoppages and strikes… On this day of March 8th, 1908, instead of obeying the law and satisfying the workers’ legal and legitimate demands, the factory owners decided to bar in this way what they called “the rising disorder”.

END_OF_DOCUMENT_TOKEN_TO_BE_REPLACED 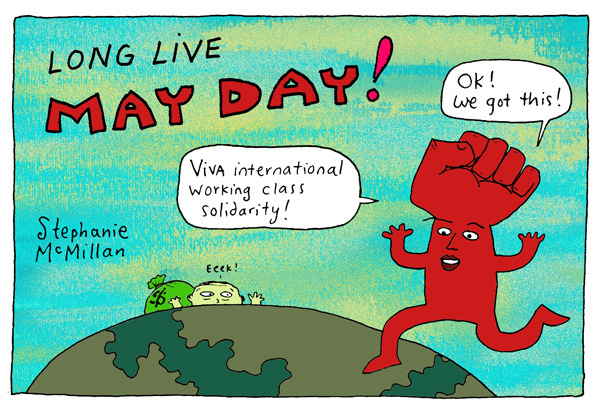 END_OF_DOCUMENT_TOKEN_TO_BE_REPLACED

The bourgeoisie constantly recuperates what belongs to the people. International Women’s Day emerged from class struggle, but various states and imperialist organizations want to turn it into a mere holiday. According to the UN:

“International Women’s Day is celebrated in many countries around the world. It is a day when women are recognized for their achievements without regard to divisions, whether national, ethnic, linguistic, cultural, economic or political.”

IWWD emerged from the proletarian struggle in the late 19th and early 20th centuries. On March 8, 1857, women workers from textile and garment factories organized a strike in New York City for better pay, better conditions and basic bourgeois-democratic rights (rights such as wage increases, gender quality, and any rights you would expect in a bourgeois-democracy which can be attained without fundamentally questioning capital). On March 8, 1908, women workers of the needle trades went on strike in honor of the 1857 strike—still struggling for basic rights and the ending of child labor and bettering their horrific working conditions. On November 22, 1909, Clara Limlich, a Ukrainian-born proletarian militant, led 20,000 garment workers on strike in New York City against their horrible conditions and terrible wages. On March 25, 1911, the Triangle Shirtwaist Factory, where women workers had been organizing, caught (or was set) on fire. The owners of the factory (which like most, was a sweatshop) locked the fire exit and got away with the murder of over 140 workers! In 1910, at the Second International, Clara Zetkin, a German born proletarian militant, suggested that March 8th be the day designated for the working women of the world.