Losing our sense of worth and history, some succumb to the comfort of not doing anything, of being “revolutionaries” in thought online or in talk, but not actually organizing or engaging in the work it takes to pick up the struggle. Some become weak, giving in to opportunism, deceit, dogmatism, intellectualism, etc……ideologically dominated and historically forgetful. Past progressives and revolutionaries set a bar — we need to live up to it and stop deceiving ourselves and stop being dishonest to the people around us……

The domination is strong,
when you fold into the hands of your enemy,
you wrong, grimy situation of pacification,
opportunist tendencies,
there’s a correlation
flooded with insecurities
you find solace in a disease
the workers sing freedom songs
to carry on damn they so strong
the brains of the operation
a truly different creed
END_OF_DOCUMENT_TOKEN_TO_BE_REPLACED

My great grandmother man, she lived through so many wars

Even the “great one”, where so many fought

To accumulate for rulers and makers of laws

What was it all for, she wasn’t entirely sure

But they profit from all of them, of that we can be sure

Imagine the names with which they were called

My great grandmother lived through the “great war”

Great because their pockets would inflate as they devastate

Wars are fought for Capital let’s set it straight

END_OF_DOCUMENT_TOKEN_TO_BE_REPLACED 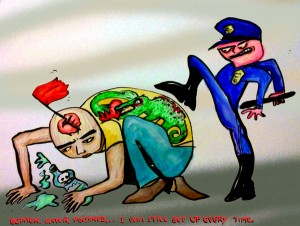 Concentration to monopoly, privatization and the property, cops maneuver sloppily, enforcing rules of robbery, pacify the mass, the workings of a brutal class. Water poisoned till it’s worse than whats in the flask, but why? Don’t even ask, triggers squeezing in our direction, yet we stuck on shoes, the disease progresses from infection and we have no clue. Bandage approaches never hit the root, just top layer selection. Neosporin on the epidermis ignores the core, internal organs in critical. An illness so destructive, the body’s malfunction is the state of the conjunction, the merging of instability and a conjuncture from which we should rupture delays the response and credibility of the financiers and heads of industry. To accurately address the affliction with acuity we must address the contradictions with organization and scrutiny, struggle towards our formation and our unity……