The bourgeoisie constantly recuperates what belongs to the people. International Women’s Day emerged from class struggle, but various states and imperialist organizations want to turn it into a mere holiday. According to the UN:

“International Women’s Day is celebrated in many countries around the world. It is a day when women are recognized for their achievements without regard to divisions, whether national, ethnic, linguistic, cultural, economic or political.”

IWWD emerged from the proletarian struggle in the late 19th and early 20th centuries. On March 8, 1857, women workers from textile and garment factories organized a strike in New York City for better pay, better conditions and basic bourgeois-democratic rights (rights such as wage increases, gender quality, and any rights you would expect in a bourgeois-democracy which can be attained without fundamentally questioning capital). On March 8, 1908, women workers of the needle trades went on strike in honor of the 1857 strike—still struggling for basic rights and the ending of child labor and bettering their horrific working conditions. On November 22, 1909, Clara Limlich, a Ukrainian-born proletarian militant, led 20,000 garment workers on strike in New York City against their horrible conditions and terrible wages. On March 25, 1911, the Triangle Shirtwaist Factory, where women workers had been organizing, caught (or was set) on fire. The owners of the factory (which like most, was a sweatshop) locked the fire exit and got away with the murder of over 140 workers! In 1910, at the Second International, Clara Zetkin, a German born proletarian militant, suggested that March 8th be the day designated for the working women of the world.

It is important to note that bosses often locked workers in factories to force them to work longer hours, and though we mark these specific dates, the class struggle of this period was constant. Often police repression ensued (along with repression by the Pinkerton detective agency, used as a parallel army of the bourgeoisie mostly for the suppression and repression of labor – they still exist today) leading up to mass arrests even murders. This is basically still the same situation around the world, especially in social formations (countries) dominated by imperialism. Also, the majority of garment workers at the time in the US were women.

In 1977, the imperialist United Nations appropriated the working class struggle of proletarian women and declared March 8 “International Women’s Day, attempting to erase the historical struggle and sacrifices of working class women against all the horrors they faced.

We have to understand that the UN’s declaration of the holiday was an imperialist appropriation. By taking the proletarian history out of the picture, the international bourgeoisie can not only erase a whole history of class struggle and co-opt struggles, but they can blur the class lines and interests of people involved. When WORKING Women’s Day becomes “Women’s Day,” then the working class women being exploited in factories around the world are placed in the same box as the women of the capitalist class that is exploiting them.

Eleanor Roosevelt never joined the Spanish workers fighting imperialism and capitalism (as the west had “non-intervention treaties); Hillary Clinton never stood with Afghan women when Bill starved them and their children with sanctions; Michelle Obama isn’t standing with the women her husband is exploiting in sweatshops and murdering with drones. 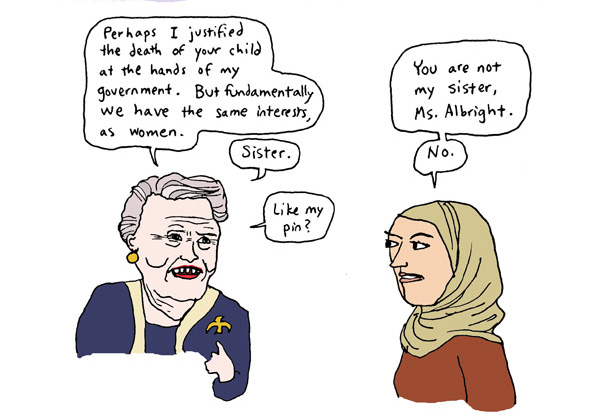 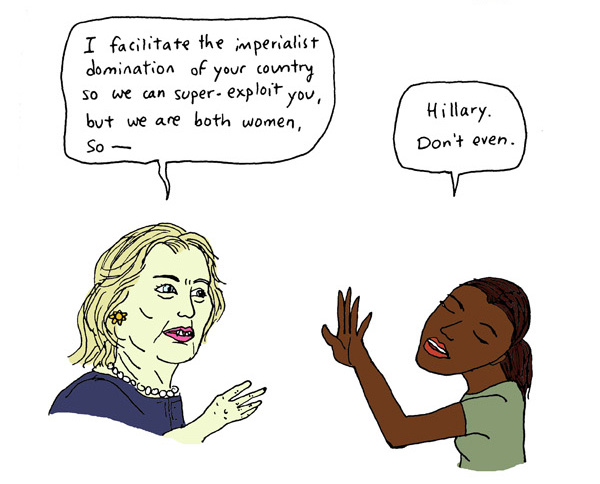 While bourgeois women lived and live in mansions, working women lived and live in squalor. The working women of the world have no interests in common with the bourgeois women of the world. The danger of identity politics is that it takes focus and struggle away from the fundamental contradiction in the world of capital vs labor, reflected in the working class versus the capitalist class.

Identity politics, by blurring the class lines, is a form of populism that unites fundamental enemies; they make women workers and their exploiters the same, which is not the case. Identity politics play into the hands of our enemies by making us lose sight of the fact that our enemies are our enemies; it identifies tendencies of capitalism as fundamental (it situates particular effects of the struggle between capital and labor – such as racism, sexism, homophobia – as the central struggle; it defines capitalism as a system of oppression that we need to fix, rather than a mode of production based on the struggle between labor and capital to be destroyed).

Identity politics would have women organize their interests separately from men, black from white, etc. While autonomy is the right of any oppressed section of people, if we are to win our fight against capitalism/imperialism, we need to understand that what we have in common and what our common interests are based on is class. This does not mean that only class matters and nothing else; on the contrary, we have to constantly struggle in our ranks against all forms of oppression that stem from capitalism, as we struggle against all bourgeois ideological tendencies. We must constantly acknowledge and struggle against sexism, misogyny, homophobia, racism, etc. We must see ourselves as comrades and truly internalize this concept.

As proletarian militants, our job is to ensure that the historical context of our struggles are not recuperated by our enemies, and to struggle based on our class interests. We have to expose the charlatans and opportunists even among our own ranks wherever they are, whenever they show their heads. Slaves and masters aren’t equal just because they have the same biological components, because they share the same complexion, or hair texture or place of birth, etc. Slaves and masters are not equal – because slaves are slaves and masters are masters. March 8 is not a day for both the worker and the boss, the exploiter and the exploited, the dominator and the dominated.

The collective struggle of the proletariat led to many capitalist concessions in some social formations that are now taken for granted, as if bestowed upon by our enemies’ good will — but they weren’t, they were fought for tooth and nail, and often won with blood! Workers DIED for every shortening of the work day (which was commonly 16 hours in some branches of industry!) Child labor was legal and common– IN MINES! These conditions are still common in some social formations – and the only thing that will end them is WORKING CLASS STRUGGLE.

March 8th is the day of the WORKING women of the world! Let’s remember the historical role of the women in our struggle, fighting side by side with their male and LGBTQI comrades! Let’s remember, the masses make history! 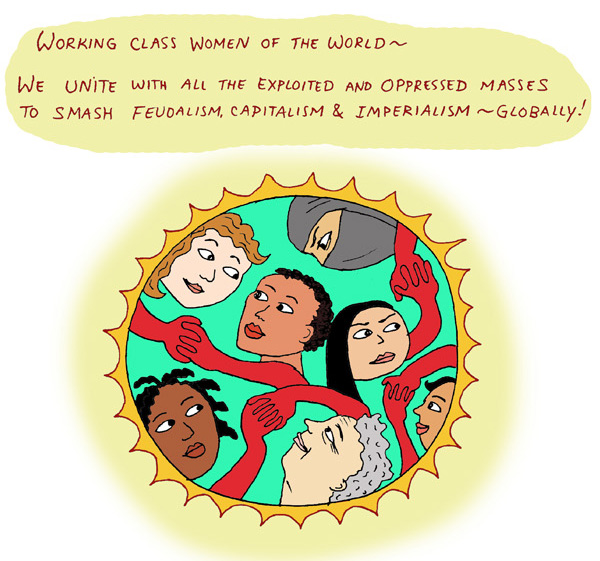