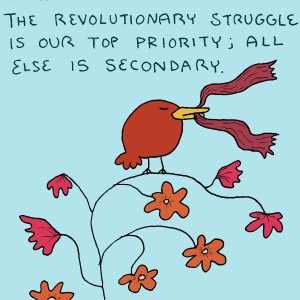 Escalating by the day, the ecological and economic devastation being inflicted on the world by capitalism is shocking and horrifying—even more so when we face our incapacity to respond effectively.

The revolutionary movements of decades past have completely disintegrated. In that process we’ve witnessed the bankrupt political line of the petit bourgeoisie, and with the working class as yet unable to take up its historical mission of destroying its fundamental antagonist, the field has been left wide open for global capitalism to invade every corner of our lives. Capital has tangled us in an economic, political and ideological web, determined to prevent us from rising up collectively against it.

Expanding inexorably, breaking all boundaries and devouring the natural world, capital zombie-walks ever deeper into crisis and conflict. With every conquest it grows more unstable. Its political legitimacy is unraveling along with the degradation of its economic health. Populations no longer able to survive under its domination rise up spontaneously, and struggle to cohere into organized movements. This is capital’s greatest danger, and it employs ever more ruthless repressive measures to prevent collective mass resistance.

It wages ideological warfare designed to pacify us, to make us believe in its invincibility and our own corresponding powerlessness. As we are increasingly unable and unwilling to tolerate the current situation, we search for a way out. To preserve their system of exploitation, the stewards of capital do everything possible to isolate us and divert us into political dead ends.

Either we overcome our weakness, or we accept that everything will continue to get worse—this is the choice we face today. Present conditions are already catastrophic; if we are to avert potential omnicide, total social transformation is an urgent necessity. Led by the international working class, we must unite to battle for our lives: to eliminate capital and profit (which have no use for us), collectivize the means of production, and base the global economy solely on the needs of humanity and the planet.

To emancipate ourselves from capitalism requires the most extreme political act: revolution. For us to go that far, we need to first imagine it as a possibility. We need to believe in our own potential collective strength, and comprehend the underlying weaknesses of our enemy. Our strength is their weakness; the process of our organization is for their disorganization. Each of us needs to decide to take responsibility for the future.

These battles first occur in our hearts and minds: in the field of ideology.

Those of us who were politically active in the 1980s thought organizing was difficult then, after the vaporization of the revolutionary movements of the 1960s and early 70s, their failure and reversion to capitalism. But at least we could still hear their echo, even if only in negation. The next generation, on the other hand, has grown into adulthood without any connection to living examples of revolution. This historical gap means that even as the masses feel the need to revolt, and increasingly desire to do so, few know what it will take to succeed. Few have any experience in political organizing, debate and struggle outside of the frameworks set up by the system itself.

We ask ourselves what a revolutionary militant is supposed to do to help bring a revolutionary situation into being, and push it toward fruition. Past revolutionaries like Marx, Lenin, Rosa, Mao, Che, and Ho have limited ability to help us. Though we still have much to learn from their experiences, they wrote for their times and places. We may pore over their old texts seeking solutions for our modern puzzles, but we won’t find any handy formulas. We have to do the work they did, of analyzing our own objective realities, with all their constantly arising contradictions and conjunctures.

At the same time, we do need to observe and uphold the standards that previous militants have set. The contemporary Left, broadly speaking, has sunk so low that our very words and concepts have lost their meaning. We have microscopic sects declaring themselves political parties and vanguards of the entire working class. We see a few union employees blockade a street in an act of theater for the media, and call that a strike. We see progressives calling themselves revolutionaries, though they do nothing more than attend meetings once a week (plus the occasional protest). We hear schemes for improving capitalism being called revolution, workers exploiting themselves in co-ops being called socialism, and the working class losing all definition by being described as “everyone who works” or even “everyone who’s not a capitalist.”

This theoretical flabbiness corresponds to ideological weakness as well. The budding movement is infested with individualism, opportunism, populism and sectarianism. Because of capitalist conditioning, we expect instant gratification. We give up when things aren’t easy. We avoid conflict and seek comfort. Our struggle to survive has made us competitive and mistrustful. Our fears of losing work and falling into an economic abyss have made us hesitant and passive.

These are extreme problems in the imperialist centers, but they are by no means confined there. Effects of a global system, they are also worldwide. This general feebleness corresponds to the current hegemony of finance over industrial capital, and its speculative, fictitious nature, quickly cycling through euphoric bubbles and toxic breakdowns. It’s a fraudulent economy vaporizing over and over again before our eyes, facilitated and justified by lying salesmen-politicians. It fosters a culture of “fake it till you make it,” even within our own camp. We learn to accept that nothing is reliable, that everything is crap.

But humans are contradictory, and like all life-forms, we have a strong survival instinct. Though mired in negative tendencies (fostered by our extremely negative circumstances), we have positive qualities too. Greed and cruelty can be cultivated in us, but these are effects of an imposed systemic pressure to compete. We evolved in collective bands, cooperative and empathetic by nature. As crushed as our dignity may temporarily appear to be, it will assert itself.

All over the world, people are standing up, people are struggling. People with tremendous heart, willful optimism in the face of profound difficulties, are out there, everywhere, searching for the threads of a potential revolutionary movement and pulling them together, tying knots, weaving a network. They embody and bring out the best in all of us: our curiosity, our faith in each other, our willingness to work hard and to sacrifice for something larger than ourselves.

We, who are alive today, must step up, because we are all we have to work with. No People’s Army or revolutionary party or militant unions are going to magically appear from the sky or from the past to wage our struggle for us. We’re the ones who are going to have to do it.

W e start from the here and now. Together we will forge ourselves into the kind of people, the kinds of organizations, the kind of movement that can take on the most powerful and heavily armed enemy that history has ever seen. To do so, we will need a strong spirit of defiance, collectivity, and unyielding discipline.

We must encourage one another in our struggles to overcome laziness, pessimism, and many fears. When we feel alone, we must remember that we are together. We need to set standards for ourselves and be firm of purpose in a time of transitional chaos and breathtaking irrationality. We need to prepare ourselves ideologically for what we hope will be a potentially revolutionary situation, and help one another become who we need to be, so we can each contribute to bringing it about, sooner rather than later.