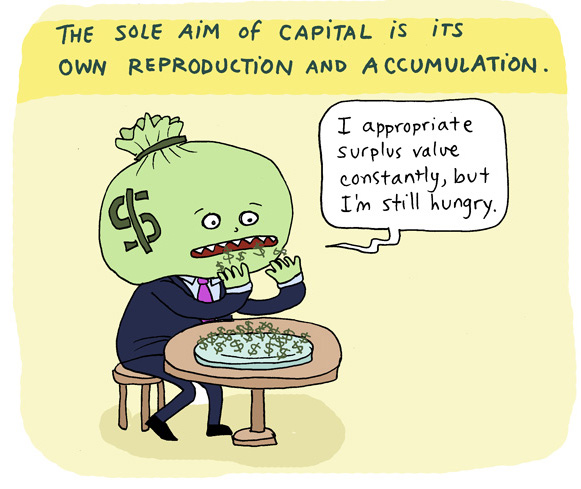 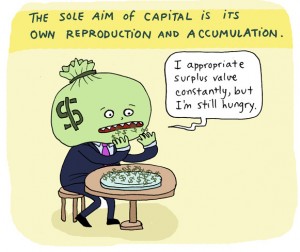 Each cycle of production respects the law of exchange of goods. The capitalist continuously buys labor power and the worker continuously sells it. Even if it is sold and bought at its actual value, the practice of appropriation based on the production and circulation of merchandise is transformed into thievery by the dialectic of the relation. In other words, what appears as the fair exchange of equivalents—“I work and get paid”—is a deception. In reality, the value of capital exchanged for labor power is only a fraction of the surplus produced by the use of that labor power, which is appropriated without equivalent. Plus, the initial capital investment must be replaced by the producer (the worker) by adding additional new surplus.

The reciprocal exchange relation between the capitalist and the worker is an illusion, its true nature obscured in the process of circulation. Disguised thievery is made possible by the separation of property and labor, the contrivance of the capitalist law of private property. All the economic forms of mercantile circulation, as well as all the bourgeois juridical forms of liberty, equality and private property, are neither the essence nor the origin of capitalist relations of production—but they are necessary means for their reproduction.

Capital accumulation is the fundamental phenomenon in which all the economic laws of the capitalist mode of production are embedded. Its conjunctural rhythm commands the demand for employment. Capital accumulation cannot simply be understood as a calculation of the average global rate of profit, as capitalists would have us believe. It depends above all on the processes involved in the organic transformation of capital, especially the relation of value of constant capital (means of production) to variable capital (labor power). Accumulation is based essentially on an ever-increasing rate in the productivity of labor, as well as on the productive technological development of relative surplus value.

Marx, from the beginning, pointed to these historical effects which are now being demonstrated by structural adjustment and its applied measures.

These two historical results further illustrate that the reproduction of labor power (forcing people to work) is integral to the reproduction of capital at the social level. The working class, like any other instrument of labor, belongs to capital. And as with all instruments of labor, the process of their reproduction (their use) entails their consumption. Metal shackles held Roman and African slaves; nowadays invisible shackles hold workers—with a major difference: the worker is bound not to one owner as under slavery, but to the whole capitalist class.