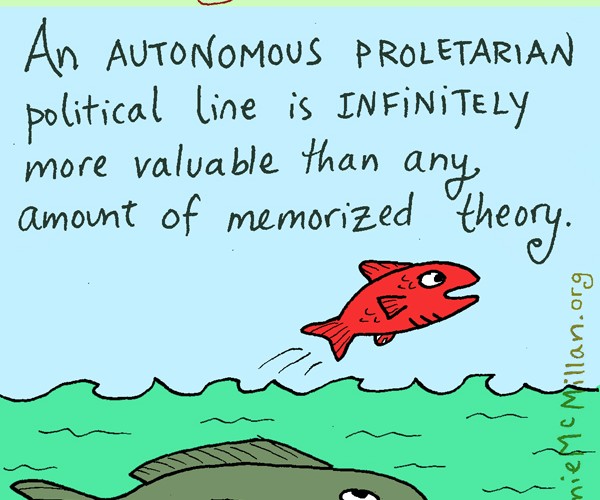 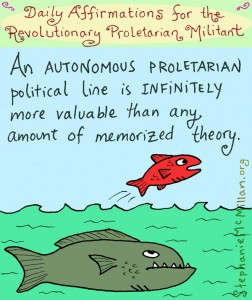 Theory is a production, a practice in which we are organizing our thoughts to interpret reality. Theory is not permanent, but it is constant, because the reality we are interpreting is constantly evolving, and the only thing permanent about reality is that it tends to reproduce. Most of the time reality far exceeds our interpretation of it. For example, Marx only hinted at imperialism and that theory was initially constructed by Lenin. If theory is a production, and constant, our interpretation of reality is also constant as a production. The fundamental elements that render the state of theory constant are CLASS STRUGGLE and the struggle for production, at the social level.

Theory is not to be memorized, because we can’t reduce it to formulas or verses as if we are studying the Bible. The Bible is an ideological instrument of the dominant classes for the reproduction of domination. Our theory is a revolutionary instrument to break completely away from that domination. The revolutionary theory of our epoch is the theory that gives an interpretation to capital and capitalism from the interest of the class that is antagonistically opposed to capital: the PROLETARIAT.

So, revolutionary theory is not to be memorized, but agreed upon. There are two levels of agreement. One is a level of understanding and the other is a level of appropriation. The appropriation of theory requires organization, revolutionary organization. Memorizing theory, outside of any practice, will only produce intellectual indigestion, a totally non-productive approach. The practice of memorizing theory is a dogmatic approach, and this is what cultist does.

Theories are not to be memorized as verses, formulas or slogans, but are rather to be validated. If we are dealing with social realities, the only form of validating theory is to engage in political practice. This process of validation is to be done from the dialectic relation between theory and practice, with practice as the determining element.

The process of constructing revolutionary theory requires being engaged in the practice of organizing for revolution.

All genuine knowledge originates in direct experience. But one cannot have direct experience of everything; as a matter of fact, most of our knowledge comes from indirect experience. It is therefore our task to constantly pass along the lessons we have learned from others (indirect knowledge), and use these as a guide for our direct practice. Again, we are dealing with a dialectical practice of general to specific and specific to general, which is a constant process as long as class struggle exists.

This political practice is a never-ending process. How many times do we witness intellectuals, mostly dogmatic intellectuals, with their theories that they are unable to put into practice? Most of the time, these dogmatic intellectuals are only Marxists when they are able to quote verses and formulas. When left on their own, they are incapable of putting their theories to the test, and their true selves are revealed as petit bourgeois liberals unable to produce anything independent of bourgeois ideologies. Therefore, there is no relation between their theories and objective reality. Theory no longer becomes an actual guide for practice, but is sterile, useless garbage.