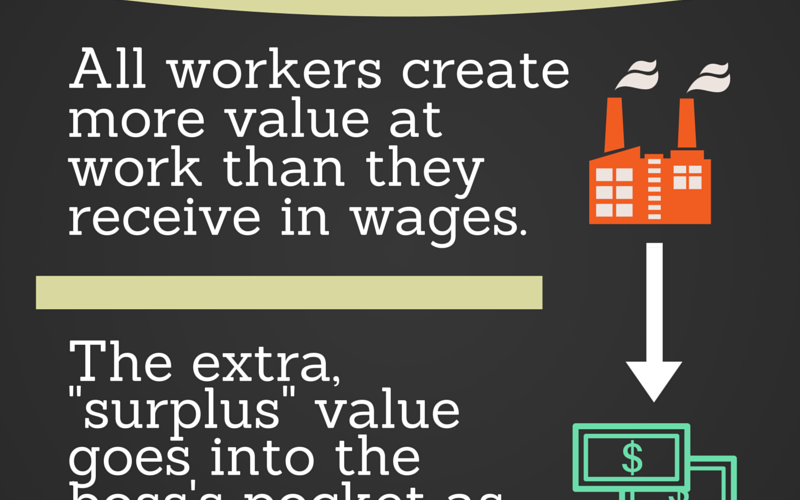 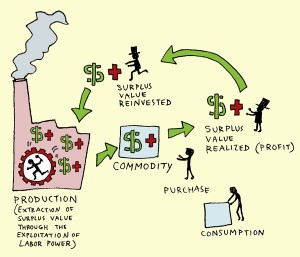 The quintessence of the theory of the capitalist mode of production in Capital is the analysis of surplus value. This establishes Marx’s rupture from political economy, sociology and bourgeois historiography.

What defines capital in a bourgeois economy is the valorization of a given quantity of value. Not all sums of value are immediately capital; it depends on their utilization. For example, a sum of money in a piggybank is not capital. To be capital, the value must be invested for accumulation. This quantity, by definition, is surplus value.

Surplus value is realizable as soon as it’s assigned to capital for accumulation, a never-ending process. This process may appear different based on different modes of investment. However, money is the most advanced and most privileged form of investment. The money form is the equivalent of all merchandise, including the means of production. Because productivity is necessary to the functioning of industrial capital, money represents the value of the material objects it is temporarily attached to. But the movement of capital is not really interested in those objects; money has value independently on its own, in itself. Essentially the movement of capital is for monetary accumulation, a developed form of circulation of money.

Surplus value is a profit, but not all profit is surplus value, even though the labor power that produces the surplus value (the origin of all capital) is transferred and destroyed in all forms of circulation and concentration of capital.

The ISO’s “ABCs of Marxism” is nothing but a caricature of Marxism, a merely Marxist-flavored definition with all the nuance of a Powerpoint slide show that reduces surplus value to a description. This caricatured approach can only lead to an eclectic usage of the concept of surplus value, because anyone with that limited understanding will be incapable of developing the concept. Worse, they will substitute the theory of surplus value and its forms with a simple theory of profits, of realization of profit and circulation of capital, such stated by the ISO: “the extra ‘surplus’ value goes in the boss’s pocket as profit.”

This is exactly what Marx vehemently critiqued of the intellectual bourgeois circle of his time. Marx denounced the approach of Ricardo, who tried to define surplus value and the processes of capitalization of surplus value in terms of profit.

This is an important point. It is not a matter of semantics. A wrong definition of the theory of surplus value will only contribute to the realization of reformism, opportunism and populism. The correct appropriation of surplus value, on the other hand, is simultaneously the construction of a political line; it is scientific socialism.

The petite bourgeoisie (including those of the ISO) is usually quick to give a reformist definition of socialism: the control of the means of production. For the proletariat, this definition is only partially correct. On its own, it is reformism and revisionism, because the control of the means of production could be achieved by judicial means. This is why the petite bourgeoisie is eager to identify as socialist any populist judicial measures taken by a government (such as Venezuela) or promises made by a candidate (such as Bernie Sanders). These judicial measures could be achieved either by suffrage (if these petit bourgeois elements weren’t such vile opportunists and would be willing to face the power), or by revolution.

Marx and Engels were correct to affirm the discovery of surplus value as the understanding of scientific socialism. Practice has not yet achieved that level of appropriation. Indeed, we must admit that in the Russian revolution these points were only addressed in theory. In China we can say that we have witnessed some sincere practice of addressing this new set of contradictions, but this was severely repressed by the capitalist roaders.

Marxism is a scientific theory and the most advanced theory, still unfinished, incomplete, even if dogmatists of the left seem to deny that. Even in his epoch, Marx was systematic enough to warn us that his contribution to that science (which we call Marxism and our political current identifies as Proletarian Theory) was a critique of political economy. Now we can see the importance of that subtitle in Capital. For us it firmly emphasizes that this science is not for fixing capitalism. No one can use this science to fix capitalism. The ISO presumes the ability to do so by taxing the rich and returning the profit to workers (whatever their definition of workers might be).

Proletarian theory contains two intimately linked opposite dualities: the appropriation of all forms of concentration of capital on the one hand, and on the other hand proletarian revolution that decimates and destroys all those forms of concentration of capital and its circulation (from which surplus value is the original source). This is what all the variations of Marxist-flavored reformist theories seem to dismiss.

If surplus value is profit but not simply profit, not limited to being profit, then what is it?

To understand surplus value we must consider capital at a social level scale, not as a simple “surplus” that goes into the pocket of the boss, as conceptualized by the ISO, others of the left, and bourgeois intellectuals at the service of capital. Such a declaration really limits our appropriation of capital and concentration of capital, especially at a time characterized by the following:

2) The concentration of capital produces, in turn, fundamental transformations in the forms of capitalist property. Production for individual private capitalists is becoming obsolete, a thing of the past, and is gradually becoming geared toward groups of capitalists. This facilitates capitalists, a class of private owners, in appropriating a portion of the social capital. It also facilitates the constant historical formation of classes, class fusion, class transfer, and class dissolution as aspects of the constant formation of the power bloc that dominates society.

The caricature by the ISO further confirms the tendency of the petite bourgeoisie to ossify, stagnate and weaken proletarian theory. 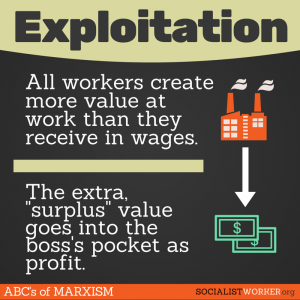 For reference, the ISO’s graphic.