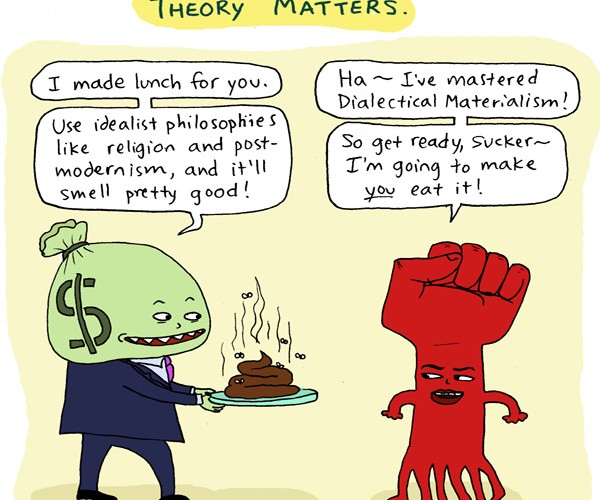 This is a preliminary presentation aimed, primarily, at building a certain level of political unity with the objective of building a Proletarian Alternative in the belly of the beast. This is in no way directed at building our intellectual capacity outside or independent of our social practice. If we did that, the result would be an association of intellectuals with no political purpose and totally disconnected from social reality.

One of the principal objectives of all our organized work is to understand the reality we are in and will struggle to transform. If we cannot appropriate this reality to the best of our ability, how can we transform it? If we do not have a scientific interpretation of objective reality, how can we begin to define the ways of transforming it or build the necessary tools needed to transform it?

Dialectical Materialism is a scientific philosophy, meaning that, as opposed to many other philosophies that are based on superstition or metaphysical beliefs, it strives to give a scientific interpretation, situated in human history, to every real phenomenon. DM allows us to have the capacity to reach a relative understanding of the real world, of different existing phenomena, the development of these complex realities and the interrelationships, if any, between them.

The problematic of proletarian struggle can’t be appropriated independently or autonomously from the history of the proletarian movement, through the periodic stages of its development. Those stages determined the problems, their various manifestations, and the elaboration of concepts and theory needed to apprehend this reality. This development shaped the constant, unavoidable and necessary rectifications and transformations of our theory.

DM is a revolutionary scientific philosophy. It is not absolute, but rather functions within an absolute relativity that is in a constant mode of rectification and in an uninterrupted process of deepening. It is not based on superstition or dogma. It only affirms things that can be demonstrated. They are many components of DM:

A. A Theory on what exists in the real world

First we need to recognize there is a difference between what actually exists in reality (the objective) and our interpretation of what exists (the subjective). They belong to two different spheres of existence. Our subjective thoughts may correspond closely to objective reality, or they may not come close at all (relative to how we are trying to apprehend or transform that reality), but reality is always objective and singular. Even when our thoughts relatively correspond, objective reality and our subjective thoughts will always be separate and different.

Accordingly, it is important that we distinguish between two fundamentally different elements:

1) Real Concrete Objects: these are unique objects of material existence that exist in singular reality, whether palpable or not, but with discernible material effects and relations to other real concrete objects.

2) An idea or representation (of a real concrete object): a subjective construct, whether or not intended to represent, to some relative level, a real concrete object. Ideas can be imaginary, illusory or delusional, or be professed to be relatively objective, but they are always subjective constructs determined by various levels of empiricism, rationality, generality, particularity and correspondence or non-correspondence to objective reality.

To summarize, it is important that we distinguish between what exists in reality and what we have in our minds. Our ideas come from how we live our reality. Our ideas don’t create reality, but rather reality is the source of our ideas.

A popular myth in petty bourgeois circles, based on post-modernism, is that “everything is relative,” meaning that reality itself is relative and depends on one’s particular point of view. It is important to debunk that viewpoint, which is highly useful in enabling petty bourgeois individualism [and manifested in corresponding political orientations such as identity politics]. To debunk this philosophy with a very simplified example: someone might see a snake and mistake it for a piece of rope; that does not make it a piece of rope. Objective reality is singular, real, and independent of our thought process. If a tree falls in the forest and no one is there to see it, it still falls, and its motion generates waves whether or not our ears are present to interpret them as sound.

B. A theory of our interpretation of what exists in the world

Our praxis (theoretically guided practice) will allow us to verify if our ideas are relatively correct or relatively erroneous, meaning that the level of correspondence of our ideas to reality is always relative. This is the reason our theory should never be viewed as something stamped on steel, irrevocable, or absolute truth. Our theory should also be rooted in the practice of the proletariat, the struggle the proletariat has already waged against the ruling bourgeois class ideology while building its own.

Ideas do not mechanically come and land on us; there are many stages in their development. In our praxis as an organized collective, there are two realities, intimately linked, that we will need to appropriate: the process of capitalist exploitation and the process of proletarian class struggle leading to revolution that prepares, lays the groundwork and accomplishes it.

Basically, there are two fundamental concepts that we need to appropriate: Surplus Value and Proletarian Leadership. By appropriating these concepts, we lay the basis for an irreversible radical rupture with the dominant ideology, permitting us to construct a science of history and of class struggle.

Some points about the development of our ideas:

Our social practice must be the source of our knowledge and of our theory, as well as their verification, rectification and deepening. Proletarian revolutionaries must use our collective knowledge and theory to better advance. If our theory doesn’t serve our practice as a guide, then it becomes a series of meaningless ideas that have lost their value.

To summarize, it is important for us to distinguish the different stages in a schematic process to appropriate the development of our knowledge:

We should not do theory for its own sake. Its purpose is to advance in proletarian struggle. In the relation between theory and practice, theory is the guide and practice is fundamental.

Dialectical Materialism allows us to distinguish between different kinds of relations existing between different phenomena and different aspects of these phenomena. We identify dialectical relationships as relationships between two or more elements that are interrelated and/or interdependent. These elements are often intertwined, one acts upon the other, and the existence of each is dependent on the existence of the other(s). For example, the relationships between classes in a social formation are dialectical relationships. Capitalists and workers are mutually dependent and cannot exists as such without the other, while the different ruling class fractions in a power bloc aggregate and leverage their state power to oppress the dominated classes.

We can further characterize the different dialectical relations existing between different aspects of a phenomenon and between different phenomena. We can identify aspects or characteristics that are either specific or general, or either particular or global. We can distinguish certain aspects as being fundamental to a particular phenomenon, meaning that their existence is key to the very existence of that phenomenon and fundamentally determines its development throughout its existence.

For example, during pre-revolutionary stages of capitalism, the capitalist class dominates the working class economically, politically and ideologically, and there is a dialectical correspondence between the different structures (economic, political and ideological) and practices therein that enable this domination. But while the economic structure plays a fundamental and determinant role in the overall development of social formations, political struggles play a super-determinant and principal role in revolutionary processes.

In all cases, generally, we should strive to use concrete analysis of concrete situations to assess the specificity and particularity of all the aspects we are considering, to gauge which ones are determinant or fundamental, principal, super-determinant or secondary, and the developmental tendencies of each one of these interrelated aspects. Such an approach is crucial for defining correct and successful political lines in the interest of the proletariat.

We can further identify special dialectical relationships that play a key role in the development of all phenomena. Inside each phenomenon, we will always find contradictions that determine the existence of the phenomenon, its nature, its development, and its relationships with other phenomenon.

What is a contradiction? A contradiction is a special dialectical relation between two opposing elements that exist simultaneously and combine to form a whole. These interdependent elements are always in struggle. While they are intertwined, one excludes the other; at the same time one can’t exist without the other, and at times one can transform into the other. Contradictions exist in every phenomenon, from its onset all the way to the transformation of the complex reality into a new one, when a new set of contradictions emerges. Bourgeois reactionary philosophy tends to view contradictions negatively, and is not in the habit of permitting us to understand the universality of contradiction, but it is not very difficult to demonstrate the existence and the role of contradictions in nature, in life and in society.

For example, the political struggle between workers and capitalists characterizes pre-revolutionary and revolutionary stages of the destruction of capitalism and the onset of socialist construction.

This example allows us to look at the identity of the opposite aspects of a contradiction. Being mutually interdependent, these aspects can, under specific circumstances, transform one into the other. Proletarian revolution transforms the working class into the dominant political power, and enables the pursuit of socialist construction leading to the dissolution of classes, class struggles, politics and the State.