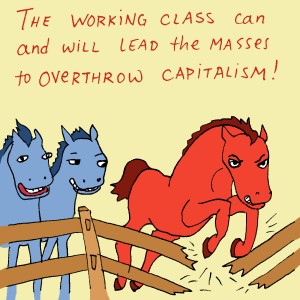 Some of these struggles between opposing interests happen to result in enlarging or integrating additional democratic rights for the masses. But that does not make them popular democratic struggles, and they should not be mistaken for such.

The battles arising from the internal contradictions within the dominant classes usually require the support of the masses on both sides. Different fractions of the dominant classes attempt to lean on the masses, use them as foot soldiers, as proxy fighters to garner widespread support and shift the balance of power in their favor.

They often use their intermediary, the petit bourgeoisie, to win over the masses to participate in these charades. For example, during electoral campaigns, petit bourgeois organizations such as most NGOs and other opportunists under the control of bourgeois bureaucratic unions serve as intermediaries for the different fractions of the dominant classes and their respective candidates. They rally the masses to vote, which in the context of class domination, is inevitably against the masses’ own interests. These elections are anti-popular.

Popular is not quantitative. Not every struggle in which sectors of the masses are participating, even in large numbers, is automatically popular. Mass participation in the electoral process does not make it popular. Nor does it make the favored bourgeois candidate or the petit bourgeois intermediary popular. Large sectors of the masses, including the working class, have supported fascism, Peron, Aristide, and Chavez. That does not mean their support was popular or that these struggles themselves were. The quantitative notion of popular is populism. Populism disregards classes and class interests.

Popular is qualitative. In the context of class domination, class antagonism and class struggle, the struggles waged globally by the masses for their interests are popular. The fight for an 8-hour workday was a popular struggle. The fight for a higher minimum wage is too (though currently there is a dire need for demarcation by laborers and workers from the participation of bourgeois bureaucratic unions pursuing their own objectives).

Now, in this current moment of capitalism—at a stage of imperialism under the hegemony of investment capital—there is no longer even a tiny progressive bone to be found in the whole body of the capitalist mode of production. There is no longer a popular value in waging struggles for inclusion (except, perhaps, in some cases in dominated social formations).

Now, with no intention of deviating from the subject at hand, a point that is a separate subject in itself must be addressed, in order to demarcate from it. This is the phenomenon of identity politics [IP].

Identity politics is a political theory and political line developed by the petit bourgeoisie as an attempt to resolve the contradictions within the people’s camp. It is based in the field of sociology, which is a superficial, bourgeois, populist approach toward social analysis.

The petit bourgeoisie is not an autonomous class; it has no capacity to offer any alternatives to capitalism. Identity politics is based on the prevailing relation of the petit bourgeoisie to capitalist production, which is one of disconnection and exclusion. In general, they are non-productive laborers who strive to climb the ladder within the capitalist framework. Their organic form of struggle is personal, and is thus inherently opportunistic and individualistic. One of their main social objectives, therefore, is a utopian vision of equality.

The proletariat is the only class capable of offering an autonomous alternative to capitalism, the only class capable of leading the fight to end the domination of the bourgeoisie over the masses. Their organic form of struggle is collective. The only way for them to exert social power is by uniting. Thus, any worker who violates the battlefield of collective struggle is quickly condemned as a scab or traitor.

Without that unity, capitalism will remain strong. Identity politics, based on individualism, superficiality, and an idealist vision of the world, is utterly harmful to the unity of the people’s camp.

The oppression of different social categories (race, gender, sex, sexuality, immigration status, nationality, religion, etc.) is required for class domination. Even if a particular social category gains rights or integration, oppression in general cannot be ended outside of the context of class struggle. The demands of most groups that focus on identity politics are not popular democratic demands, but are merely demands of the petit bourgeoisie for the goal of winning a comfortable position inside the framework of capitalism.

By focusing exclusively on identity and ignoring class domination, identity politics in fact mirrors the oppressions that it strives to put an end to. It attempts to persuade working class women that men in general, rather than capitalist men and women, are their fundamental enemy. It emphasizes race and conflates it with cultural heritage. This is a totally unscientific approach, because race doesn’t biologically exist; it was invented and imposed as a social category to serve as a tool of domination.

Of course we recognize that contradictions exist among the masses, mostly generated through the enforcement of class domination. These contradictions produce ideological tendencies (racism, sexism, etc.) that filter into and among all the classes that comprise the social category of the popular masses. They are deviations based on dominant ideologies.

We insist on addressing these ideological deviations in a collective way, rather than in a manner that reproduces individualism. We need to engage together in struggle against the capitalist class. In the process, we must construct new material conditions capable of eradicating these negative tendencies, and rectifying the contradictions among the masses. This must not simply be superficial fixes, such as attempting to achieve quotas of particular social categories in our political organizations.

Social categories are not fixed or inherent qualities, but are historically determined. Any anti-imperialist or revolutionary militant should not be judged for any social category they happen to correspond to, but by their ideological strength, their political line, and primarily by their practice.

Let’s break down and define the components of the concept of autonomous popular democratic struggle:

Autonomous refers to the capacity to struggle against domination based on one’s class interests. In any social formation, the working class is the only class able to offer a serious [autonomous] alternative to capitalism. In the US, the working class has not yet constructed autonomous alternatives to capitalism, which makes the notion of autonomy quite limited. When they do, then we can state that the concept of autonomous is part of objective reality.

Popular characterizes an ensemble of struggles and demands that allows history to advance in the interest of the masses. The fights for higher wages, minimum wages, free health care, free education, and for the right to organize are all popular struggles. In this period, the right to vote is not a popular democratic struggle, because it doesn’t weaken or threaten the existence of capitalism in any way. (This doesn’t necessarily mean that anti-imperialist and progressive militants should never use elections to pursue certain objectives). Boycotting a capitalist election is not a popular democratic struggle; exposing the nature of the electoral process is.

Democratic refers to the goals of these mass struggles. They are for one or both of two purposes: 1] they may enlarge bourgeois democratic rights, and/or 2] they may stop, delay or limit the capitalist class in its pursuit of certain objectives. They are not, themselves, for the conquest of power. Viewing the goal of democratic struggles as the conquest of democracy (which cannot be achieved by this form of struggle but only by revolution overthrowing the dominant classes), will lead to reformism.

Struggle involves combativeness, and the recognition of class antagonism. The interests of the masses can be furthered only by organizing our forces to exert social pressure against the dominant classes (who never stop exerting social pressure for their own interests), and force them to make concessions. We aim to increase our collective strength and weaken theirs.

Autonomous popular democratic struggles are essential for the development of the consciousness of the masses, and for solidifying the relations of the masses with revolutionary organizations.