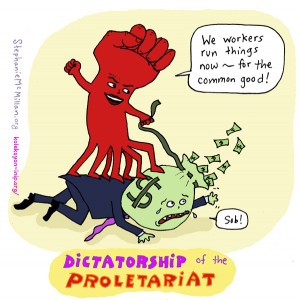 Many workers today are confused about a key concept of historical materialism, the idea of the “dictatorship of the proletariat.” It is a very literal English translation, it means exactly how it reads: the idea that workers should have political power, instead of the bosses, corporations and landlords—essentially the exact opposite of what we have today. We live under the “dictatorship of Capital,” where everything is reduced to exchange values and commodification, even people.

It is fashionable these days to reject the notion of “taking power” as “authoritarian,” and many young Leftists are attracted to Anarchism or “identity politics,” where one gets to be radical without taking on the responsibility of a real fight for working class rule, which would require a disciplined combat party or similar structure. Even those who call themselves “Marxists” have fallen under the spell of “gradualism” or incremental reforms, and speak of “political revolution” in place of a real fight for power, that is, a real proletarian revolution. Some of these folks have lengthy academic credentials they can point to, to bolster their claims to a “Marxist” heritage, while claiming that they have deduced some new theory that better fits “our time,” etc., that the need for “revolution” has been supplanted by a more civilized “progressivism” that will overcome capitalism through gradual mass acceptance of liberal “reason.” Workers cannot afford to be misled by these “theorists,” regardless of their CVs and sophistry.

In any contest between two “rights,” force decides. That is, if I say I have a right to health care and a decent home, and someone, say, a conservative, disagrees, whomever can muster the most force will decide the issue. Or, simply put, it is a question of class power, class forces. The working class must develop a “nose for power,” must assert its will in the contest with imperialism, and it can only be done by mobilizing itself to take power, “dictate” its terms to the enemy. The opposing force, the ruling class, knows no polite “gradualism,” no aversion to exertion of raw violence to meet its ends; these are the bare stakes of the struggle we face.

For more on this topic, please see:
http://koleksyon-inip.org/notes-on-power-the-state-and-proletarian-dictatorship/