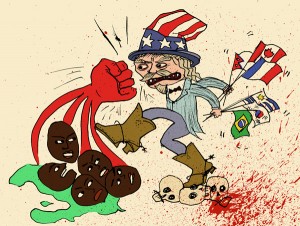 July 28, 2015 will mark the 100th anniversary of the first US occupation of Haiti. The occupation lasted 19 years, from 1915 to 1934. It was a turning point in the history of Haiti, a turning point that jolted the country into a steeper downfall under the boots of US imperialist domination. These days, because of this centenary, we have the opportunity to reflect more thoroughly on these events. While we are engaged in these reflections, as we are condemning all the aggressions, murders, expropriations, repression, exploitation, abuse and criminal injustice of the occupying forces, it would also be worthwhile to ponder what factors facilitated the occupation, how the degradation of the Haitian social formation opened the doors to the occupation: “even rotten teeth can chew soft food”.

On July 28, 1915, a squadron of about 400 marines (who had been aboard a US warship in the bay of Port-au-Prince, Haiti’s capital) landed in Bizoton, close to the capital, and took over the country. According to Suzy Castor’s book “The US Occupation of Haiti”, the Haitian military’s resistance was sporadic and limited to just a few places. The vast majority of Haitian forces surrendered. In all, the occupation began with a force of 2,200 marines. This force was reduced to about 1,000 soldiers for most of the occupation. It was supplemented by a local gendarmerie of about 3,000 Haitian recruits under the command of US officers. This gendarmerie was the main force responsible for the US occupation.

It was the Cacos (mostly poor peasants, poorly armed mostly with machetes) under the leadership of Charlemagne Péralte and Benoit Battraville, who waged the main resistance struggle against the occupation forces. Even though there were many other fields of resistance, particularly from workers in plantations that were set up by US agro-industrial firms (Plantation Dauphin, SHADA, HASCO…), or workers in the ports loading and unloading products, and even petty bourgeois intellectuals who stood up and denounced the occupation (mostly in the cities), it was really the poor peasants who waged the strongest resistance against the occupation. Poor peasants were mobilized because they were expropriated from their land, and they were forced to work in slave-like conditions in chain gangs building roads for the occupying forces. In the South, there was the resistance of the Lamontagne and Marchaterre regions, but there was resistance everywhere against the exactions of the occupation forces. The North, the West and the Central Plateau were the main areas of resistance where the armed struggle of the Cacos was rooted.