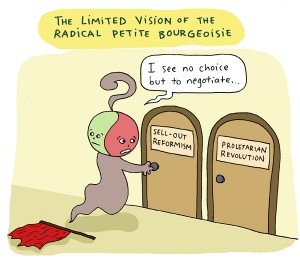 Once again the radical left petite bourgeoisie has failed.

This is not particular to Greece. It is a general tendency of struggles in many other social formations as well, wherever the petite bourgeoisie instead of the working class is leading the struggle. One lesson to learn is that whenever we persist in hoping that something positive will come from petite bourgeois leadership, however radical they might seem, THE RESULT WILL BE THE SAME: A TOTAL CAPITULATION TO CAPITAL.

The experience of Greece has once again confirmed a theory developed by previous revolutionary militants that the petite bourgeoisie is incapable of challenging capital, no matter how their radicalism is manifested in their political practice. In the end, this non-autonomous class will inevitably show its impotence and capitulate to capitalism/imperialism. Over and over again, they will always offer all the popular struggles of the masses to capitalism on a silver platter—as they have done in Peru, South Africa, Nepal, the social formations involved in the Arab Spring, and many others.

The international radical left will shove these dismal experiences under the rug of their historical failure and hop onto new experiences, hoping to get lucky. But however persistent they are, we can be sure it will be another failure, another manifestation of their bankrupt line.
END_OF_DOCUMENT_TOKEN_TO_BE_REPLACED

Losing our sense of worth and history, some succumb to the comfort of not doing anything, of being “revolutionaries” in thought online or in talk, but not actually organizing or engaging in the work it takes to pick up the struggle. Some become weak, giving in to opportunism, deceit, dogmatism, intellectualism, etc……ideologically dominated and historically forgetful. Past progressives and revolutionaries set a bar — we need to live up to it and stop deceiving ourselves and stop being dishonest to the people around us……

The domination is strong,
when you fold into the hands of your enemy,
you wrong, grimy situation of pacification,
opportunist tendencies,
there’s a correlation
flooded with insecurities
you find solace in a disease
the workers sing freedom songs
to carry on damn they so strong
the brains of the operation
a truly different creed
END_OF_DOCUMENT_TOKEN_TO_BE_REPLACED