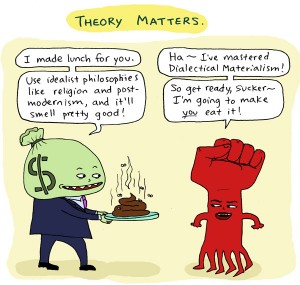 This is a preliminary presentation aimed, primarily, at building a certain level of political unity with the objective of building a Proletarian Alternative in the belly of the beast. This is in no way directed at building our intellectual capacity outside or independent of our social practice. If we did that, the result would be an association of intellectuals with no political purpose and totally disconnected from social reality.

One of the principal objectives of all our organized work is to understand the reality we are in and will struggle to transform. If we cannot appropriate this reality to the best of our ability, how can we transform it? If we do not have a scientific interpretation of objective reality, how can we begin to define the ways of transforming it or build the necessary tools needed to transform it?

Dialectical Materialism is a scientific philosophy, meaning that, as opposed to many other philosophies that are based on superstition or metaphysical beliefs, it strives to give a scientific interpretation, situated in human history, to every real phenomenon. DM allows us to have the capacity to reach a relative understanding of the real world, of different existing phenomena, the development of these complex realities and the interrelationships, if any, between them.

The problematic of proletarian struggle can’t be appropriated independently or autonomously from the history of the proletarian movement, through the periodic stages of its development. Those stages determined the problems, their various manifestations, and the elaboration of concepts and theory needed to apprehend this reality. This development shaped the constant, unavoidable and necessary rectifications and transformations of our theory.

END_OF_DOCUMENT_TOKEN_TO_BE_REPLACED 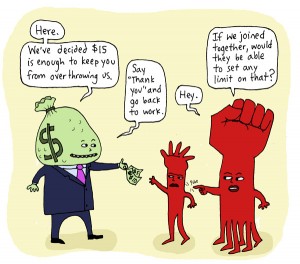 Struggling for a minimum wage adjustment is a political battle at its initial point: the economic front.

Since we are talking of a political battle, one of the rules of that struggle is the relation of forces. At this moment in our conjuncture, our forces capable of forcing our class enemy to concede are weak and dominantly disorganized.

At present, the alternative to offer us a minimum wage remains in the hands of bourgeois organization and the state apparatus, and if they do so it will be for their own interest. We must admit now that the struggle for the $15 minimum wage is not an autonomous struggle of the working class and laborers. It will transform into an autonomous struggle only when the proletariat in particular owns their destiny, along with the masses under the leadership of the proletariat.

In the hands of the bourgeoisie, mainly bourgeois labor organizations [i.e.: AFL-CIO and SEIU], it is a struggle to secure their primary form of capital accumulation through the enlargement of their membership base to collect dues.

It is a struggle for them to deal with a very complex contradiction: mobilizing the rank and file while at the same time making sure that orientation doesn’t create an overflow that will push the struggle beyond the bourgeoisie’s desired limits. These bourgeois organizations are politically heavily leaning on the petite bourgeoisie’s activism, pragmatism and radicalism to not only help them realize the goal of maintaining a social base, but at the same time to keep the masses at bay. It is a very contradictory orientation since the petite bourgeoisie is dominated as well, and does have demands as well. This contradictory element is creating a constant condition for the possibility of overflowing. The bourgeoisie is well aware of that. Their leaning on the petite bourgeoisie is accomplished through the non-profit, CBO and NGO, structures controlled and funded by them, and they could terminate the lifeline of these organizations at any time.

A second orientation is that the struggle for the minimum wage is a gross marketing ploy, being presented as a moral issue capable of being brought into a legalistic battlefield, while attempting to keep all the classes antagonistic to capital at bay (since the petite bourgeoisie domination under capital is not antagonistic, they are naturally and instinctively reformist—with all their radicalism, they are the most natural allies of the bourgeoisie in that struggle).

The state apparatus is the political organizer and administrator of bourgeois democracy/dictatorship, so they too will intervene in the wage issue. They understand they have a powder keg ready to ignite with any little spark from the plurality of the political spectrum. Their decisions to reform the minimum wage or unpaid overtime are political ploys in the interest of the bourgeoisie (even if some members or fractions disagree)as a way to keep water ready to douse the powder keg. The main objective of the State in giving us crumbs is, in the interest of capitalism, to keep us disorganized.

What do we do?

At this time, though we are in a structural crisis of capitalism, our forces are weak, dispersed and dominantly disorganized. But we will not raise the white flag simply because we are strategically and tactically in a position of weakness. We should certainly not raise our hands on the air and say, “Thank you for the crumbs.” We need to understand our weakness and define a strategy to overturn the balance of power in our favor.

How do we start?

The struggle for the minimum wage adjustment is, at this time, an alternative that will benefit a fraction of the capitalist class and the capitalist class, as a bloc, even if the crumbs are good for us. We should take the crumbs if it happens, but our demands should not be restricted to what they decide we need. WE SHOUILD NEVER BE SATISFIED.